Our journal article [1] looks at encouraging good practice to enable reproducible analysis of data analysis workflows. This is a result of a collaboration between social scientists and a computer scientist with the ADRC-Scotland.

Abstract: Powerful new social science data resources are emerging. One particularly important source is administrative data, which were originally collected for organisational purposes but often contain information that is suitable for social science research. In this paper we outline the concept of reproducible research in relation to micro-level administrative social science data. Our central claim is that a planned and organised workflow is essential for high quality research using micro-level administrative social science data. We argue that it is essential for researchers to share research code, because code sharing enables the elements of reproducible research. First, it enables results to be duplicated and therefore allows the accuracy and validity of analyses to be evaluated. Second, it facilitates further tests of the robustness of the original piece of research. Drawing on insights from computer science and other disciplines that have been engaged in e-Research we discuss and advocate the use of Git repositories to provide a useable and effective solution to research code sharing and rendering social science research using micro-level administrative data reproducible.

On 5 December 2016 I presented a tutorial [1] on the Heath Care and Life Sciences Community Profile (HCLS Datasets) at the 9th International Semantic Web Applications and Tools for the Life Sciences Conference (SWAT4LS 2016). Below you can find the slides I presented.

The 61 metadata properties from 18 vocabularies reused in the HCLS Community Profile are available in this spreadsheet (.ods).

My latest publication [1] describes the process followed in developing the W3C Health Care and Life Sciences Interest Group (HCLSIG) community profile for dataset descriptions which was published last year. The diagram below provides a summary of the data model for describing datasets which covers 61 metadata terms drawn from 18 vocabularies.

I’ve been recognised an outstanding reviewer in 2015 for the Journal of Web Semantics. You can see full details of my reviewing history on my reviewer profile page. 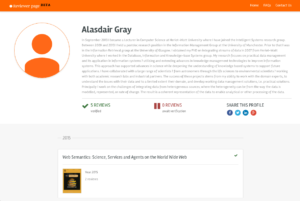 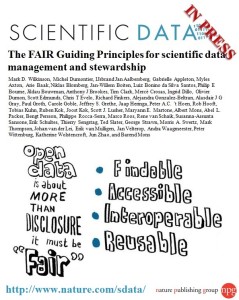 Today, March 15 2016, the FAIR Guiding Principles for scientific data management and stewardship were formally published in the Nature Publishing Group journal Scientific Data. The problem the FAIR Principles address is the lack of widely shared, clearly articulated, and broadly applicable best practices around the publication of scientific data. While the history of scholarly publication in journals is long and well established, the same cannot be said of formal data publication. Yet, data could be considered the primary output of scientific research, and its publication and reuse is necessary to ensure validity, reproducibility, and to drive further discoveries. The FAIR Principles address these needs by providing a precise and measurable set of qualities a good data publication should exhibit – qualities that ensure that the data is Findable, Accessible, Interoperable, and Reusable (FAIR).

The principles were formulated after a Lorentz Center workshop in January, 2014 where a diverse group of stakeholders, sharing an interest in scientific data publication and reuse, met to discuss the features required of contemporary scientific data publishing environments. The first-draft FAIR Principles were published on the Force11 website for evaluation and comment by the wider community – a process that lasted almost two years. This resulted in the clear, concise, broadly-supported principles that were published today. The principles support a wide range of new international initiatives, such as the European Open Science Cloud and the NIH Big Data to Knowledge (BD2K), by providing clear guidelines that help ensure all data and associated services in the emergent ‘Internet of Data’ will be Findable, Accessible, Interoperable and Reusable, not only by people, but notably also by machines.

The recognition that computers must be capable of accessing a data publication autonomously, unaided by their human operators, is core to the FAIR Principles. Computers are now an inseparable companion in every research endeavour. Contemporary scientific datasets are large, complex, and globally-distributed, making it almost impossible for humans to manually discover, integrate, inspect and interpret them. This (re)usability barrier has, until now, prevented us from maximizing the return-on-investment from the massive global financial support of big data research and development projects, especially in the life and health sciences. This wasteful barrier has not gone unnoticed by key agencies and regulatory bodies. As a result, rigorous data management stewardship – applicable to both human and computational “users” – will soon become a funded, core activity within modern research projects. In fact, FAIR-oriented data management activities will increasingly be made mandatory by public funding bodies.

The high level of abstraction of the FAIR Principles, sidestepping controversial issues such as the technology or approach used in the implementation, has already made them acceptable to a variety of research funding bodies and policymakers. Examples include FAIR Data workshops from EU-ELIXIR, inclusion of FAIR in the future plans of Horizon 2020, and advocacy from the American National Institutes of Health. As such, it seems assured that these principles will rapidly become a key basis for innovation in the global move towards Open Science environments. Therefore, the timing of the Principles publication is aligned with the Open Science Conference in April 2016.

With respect to Open Science, the FAIR Principles advocate being “intelligently open”, rather than “religiously open”. The Principles do not propose that all data should be freely available – in particular with respect to privacy-sensitive data. Rather, they propose that all data should be made available for reuse under clearly-defined conditions and licenses, available through a well-defined process, and with proper and complete acknowledgement and citation.This will allow much wider participation of players from, for instance, the biomedical domain and industry where rigorous and transparent data usage conditions are a core requirement for data reuse.

“I am very proud that just over two years after the meeting where we came up with the early FAIR Principles. They play such an important role in many forward looking policy documents around the world and the authors on this paper are also in positions that allow them to follow these Principles. I sincerely hope that FAIR data will become a ‘given’ in the future of Open Science, in the Netherlands and globally”, says Barend Mons, Professor in Biosemantics at the Leiden University Medical Center.