This page was created to honour the memory of Martin Kruskal, and in particular his links with Scotland, with Heriot-Watt University, and with Edinburgh.

A general "In memoriam" page for Martin will be found on the Rutgers web site. His Wikipedia entry was written under the editorship of Edward Witten. His obituary in the New York Times will be found here, and there are also obituaries on the Princeton Web page and on the SIAM web pages. A biography will also be found on the St Andrews History of Mathematics pages.

Martin first visited Heriot-Watt in 1982 on the occasion of a Conference on Nonlinear Waves and Solitons.

He unveiled a plaque on the Union Canal near the Riccarton campus of Heriot-Watt to commemorate the first sighting of the soliton there by John Scott Russell in 1834. This plaque can still be seen on Bridge no. 11 near Hermiston.

I particularly treasure this nice photograph

of myself with Alwyn Scott and Martin following the naming of the Scott Russell Aqueduct.

On July 12, 2000, Martin received the Honorary Degree of Doctor of Science from Heriot-Watt University. I was in the fortunate position of delivering the laureation on this occasion, and a copy is available here, together with some official and unoffical photographs. This occasion was historic for at least two reasons. Firstly, and surprisingly, this seems to be the only Honorary Degree that Martin ever received. Secondly, this may be the only time Martin has been seen wearing a suit.

Martin last visited Heriot-Watt in July/August 2006, when he attended an ICMS Workshop on the Algebraic Theory of Differential Equations. The website for this meeting includes a photograph of Martin and a copy of the notes for his talk on Surreal Numbers. A video of this talk was also made which will be made available for download soon.

Martin had been elected to a Honorary Fellowship of the Royal Society of Edinburgh in 2001, however he wasn't able to sign the Roll until his visit to Edinburgh in 2006. 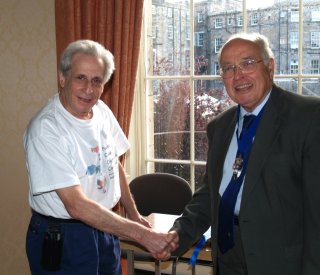 The President of the RSE, Sir Michael Atiyah, who formally admitted Martin to the RSE on this occasion, was particularly delighted as he himself had been inspired to work in soliton theory by reading Martin's papers.

The draft of an Obituary written for the RSE by David Parker is attached here.