Currently Working on ORCA Hub funded by EPSRC and industry

I am currently (since Jan.2018) working as Experimental Lead on the Human Robot Interaction theme of the ORCA Hub project (Offshore Robotics for Certification of Assets), funded by EPSRC and industry. The aims of the hub project can be found here:https://orcahub.org. There are over 40 collaborating researchers with more being recruited. Some are here at the Edinburgh Centre for Robotics which is a collaboration between Heriot-Watt University and The University of Edinburgh. Others are in Imperial College London, University of Oxford, and University of Liverpool.

Previously I was working on MIRIAM (Multimodal Intelligent inteRactIon for Autonomous systeMs) as part of HWU INCRA lab funded by dstl under the Defence and Security Accelerator theme, Revolutionise the human information relationship for Defence, with industry partners SeeByte and Tekever.

My other research areas are:

I created the additional tools deployed on the www.well-sorted.org website to allow live online input from breakout groups during meetings that have been organised using the original well-sorted pre-meeting idea organisation tools. The in-meeting tools allow meeting attendees to enter a record of their breakout group discussions live during the meeting while the meeting organiser can monitor progress of all the groups and later use the discussion record to support presentations of the group discussions. One part of the tools is an interactive supported networking session visualisation tool. An example of the output from this tool can be seen here. (Scroll down that page). That tool featured in a CSCW demo paper (ACM Digital Library link). Youtube tutorial videos illustrating these in-meeting tools can be seen here (see the playlist of videos entitled “Well Sorted In-Meeting Tools”).

My PhD work was on CDI “Head-Crowd” project, an interdisciplinary project in the Schools of Mathematics and Computer Science (MACS) and Textile and Design (TEX). The focus is on perceptual image browsing, visual communication, visual summary and interpretation of visual design feedback. 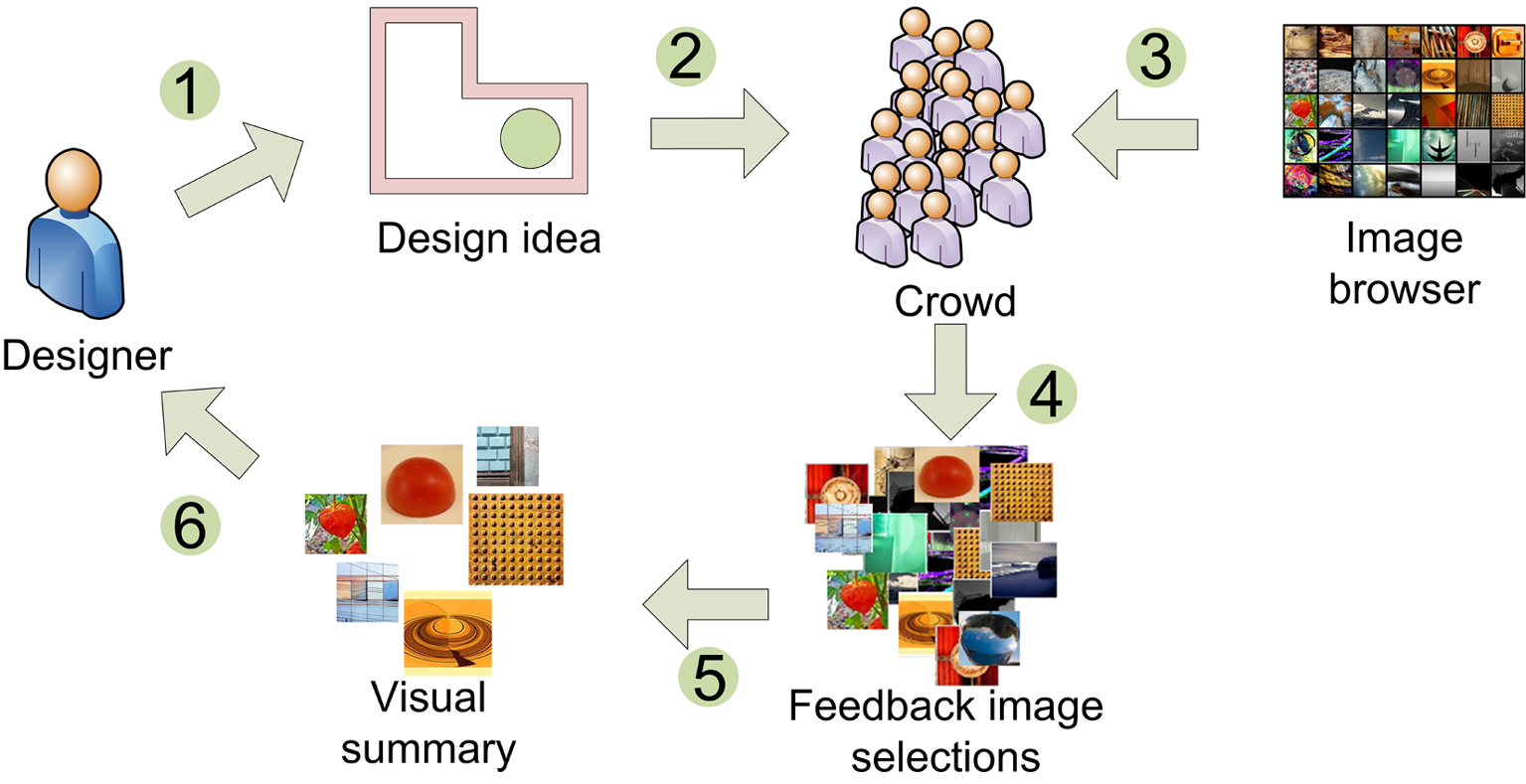 Part of my work on capturing visual feedback has involved building a perceptually relevant image browser populated with a set of abstract images. The images were screen-scraped from Flickr.com (See project acknowledgements below). Human perceptions of the relative similarity of the images were captured using techniques devised by Dr. Fraser Halley (See his PhD thesis under “PhD Thesis” in the Publications tab at the top of this page). 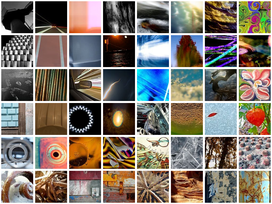 The project abstract image set can be viewed in the Self Organising Map Browser. Images judged by observers as being highly similar to each other are grouped in stacks together. Adjacent stacks contain images judged more similar to each other than stacks farther apart. Note how the observers’ similarity judgements and the SOM construction algorithm has resulted in apparently themed regions in the browser. e.g. architectural at the top right, and highly abstract, colourful at the top left. Click the thumbnail image above to try out an HTML version of the SOM browser. (In our experiment it was built it in Flash and deployed to iOS on iPads.)

Try the browser in its 7×5 stack format as used in some of the more recent experiments which used a web app interface.

The SOM browser features in the recent publications and additionally in following publications: 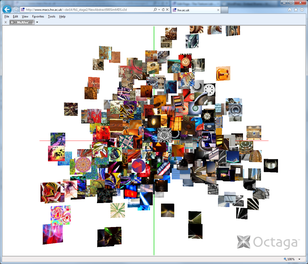 The collective similarity judgements of human observers about the images can, perhaps, be better visualised in 3D “similarity” space. The closer an image is to another; the more similar those images were judged to be by observers. Conversely, the farther away two images are, the less similar they were judged to be. The similarity data was used as input to construct the SOM browser.

If a crowd were asked to give feedback by selecting images from the browser the gathered image selections might be so large in number as to overwhelm a designer seeking the feedback. To address this problem we developed an algorithm to generate visual summaries consisting of representative images. The algorithm uses clustering based on the image selections and the human perceptual similarity data previously gathered on the image set. (This is the same data that is used to organise the abstract image browser). The algorithm is described in the CHI’15 paper.

The image summarisation also features in the CSCW’15 extended abstract and additionally in following publications: 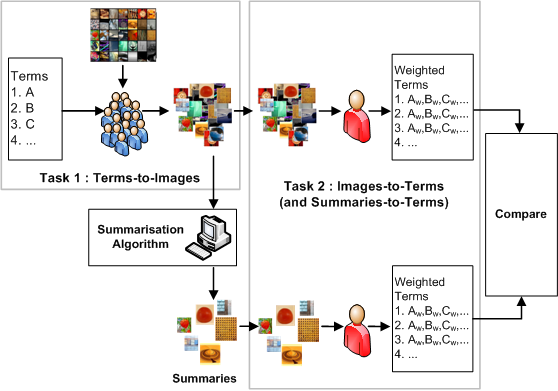 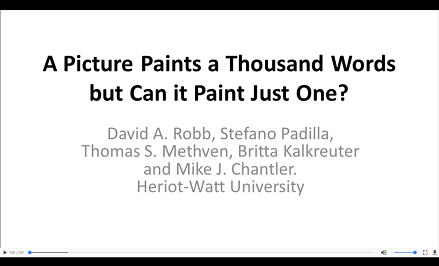 A video describes the experiment which features in the DIS’16 paper in the recent publications. The terms, the raw term image selection lists, and the algorithmically generated summaries from the experiment can be viewed using this viewer web application: The Fb Viewer (V2) is designed to be tablet (and ‘fablet’) friendly. It uses the latest jQueryMobile beta v 1.3. At the time of writing there is a slight problem with jQM v1.3 and Internet Explorer so if you are using Internet Explorer you may wish to view the desktop version.

To allow more figurative communication, a second browser was built. 2000 images were categorized by tagging them with terms from an emotion model. Thus every image has a normalized emotion tag frequency profile (see image above) representing the judgments of 20 paid, crowdsourced, participants. 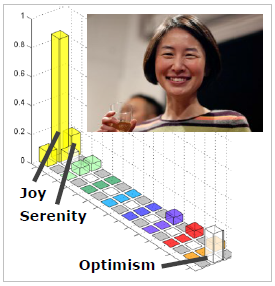 Using these profiles, the set was filtered to 204 images covering a subset of emotions suited to design conversation. The emotive images are arranged in a SOM browser defined by the emotion profiles (frequency vectors) in a similar way to the abstract browser (based on similarity vectors).

Try the emotion image browser in its 7×5 stack format as used in some of the more recent experiments which used a web app interface.

The emotion image browser features in the CHI’15 paper and the CSCW’15 extended abstract.

The crowdsourced visual feedback method (CVFM) was evaluated in a study with  interior design students puting forward their designs for feedback and a group of student participants acting as the crowd giving feedback. The crowd were shown the designs in a random order and asked “How did the design make you feel?”. They were asked to give thier feedback in the form of abstract images, emotive images and text. In the recent publications, the CHI’15 paper reports the designer side of the evaluation and the CSCW’15 extended abstract reports the crowd side. Below is a link to a 30 second video which accompanies the CHI paper.

In 2016 I had an opportunity to investigate the idea put forward in the CSCW’15 extended abstract that perhaps the experience of the feedback-givers in the crowd was influenced by their cognitive styles. I recruited 50 internet users from 19 to 77 years old, measured their cognititive styles with Blazhenkova & Kozhevnikov’s (2009) OSIVQ self report questionnare. They then did a feedback task rating three feedback formats (abstract images, emotion images and text). They also completed a post-task survey of mainly open questions. We found that engagement for the emotion images was significantly positively correlated with the degree to which participants were more visual than verbal in cognitive style. This is reported in a DIS’17 paper.

Image sets:-
The project has established two databases of images for use in visual feedback. The images in the databases have been sourced from Google and Flickr and all have a Creative Commons licences. These contributors are acknowledged below.

I did my MSc here at Heriot-Watt. I made a rich web application called The Dendrogrammer as part of my dissertation. Here is a link to a demo of that app.